We have now observed three distinct charge density waves in the nematic superconductor, Ba1−xSrxNi2As2 (BSNA). This pnictide material has the same structure as the 122-phase FeAs superconductors, but contains Ni instead of Fe. Paglione’s group at the University of Maryland recently observed a 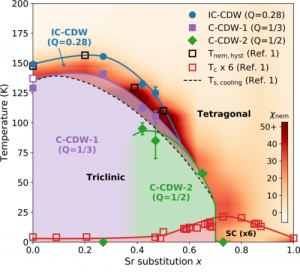 sixfold enhancement of superconductivity in this material due to nematic fluctuations near a quantum phase transition. Using x-ray scattering, we discovered a new charge density wave (CDW) in BSNA that is distinct from the two CDWs we reported previously.This CDW is commensurate with a period of two lattice parameters, and suggests that the anomalous superconductivity reported in this material arises from heterogeneous nucleation at domain walls in this CDW.

You can read the full article here. 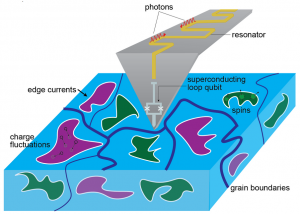 We were recently awarded a $12.6M Energy Frontier Research Center by the U.S. Department of Energy. With our partner, SLAC National Accelerator Laboratory, we will pioneer several new quantum sensing techniques for studying elementary phenomena in quantum materials. These will include a scanning qubit microscope, a time-of-flight instrument for detecting Einstein-Podolsky-Rosen pairs of electrons, and an x-ray instrument for studying nonlinear optical response of materials at nonzero momentum.

You can read the full press release here.

We just finished a study demonstrating a way to use time-resolved RIXS to measure the collective exctiations of quantum materials, in this instance CDW-ordered La2-xBaxCuO4 (LBCO). The idea is to weakly perturb the system with a pump pulse and then measure the time evolution of the order parameter, which encodes the collective excitations of the system. The advantage of this technique is that the energy information comes from the time dynamics in a Fourier sense, allowing one to achieve extraordinarily high, sub-meV resolution. We found that the excitations in LBCO are overdamped and propagate diffusively, exhibiting dynamic critical scaling analogous to that observed in Oswald ripening in metal alloys in the 1980’s. The study, which was a collaboration with Nigel Goldenfeld’s group done at the new LCLS free electron laser facility at SLAC, was published in Science Advances.

These images were taken at beamline ID-6 at the Advanced Photon Source (credit: Ali Husain).

Our paper on density fluctuations in Bi2Sr2CaCu2O8+x appeared in the Proceedings of the National Academy of Sciences. This study shows that, 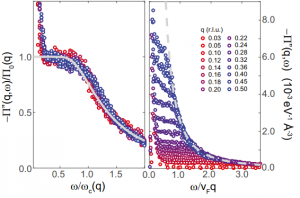 unlike conventional metals, this so-called “strange metal” does not exhibit propagating plasmons. Instead, it shows a continuum of fluctuations exhibiting “local scale invariance”–a phase in which time and space axes become decoupled. The origin of these fluctuations is still a mystery.

Read all about it here.

After several months of HVAC renovations the M-EELS instrument is back up and running. Looking forward to a blissful summer of experiments. 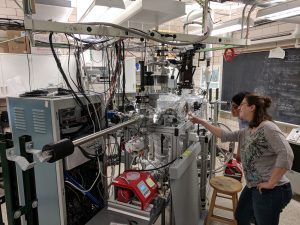 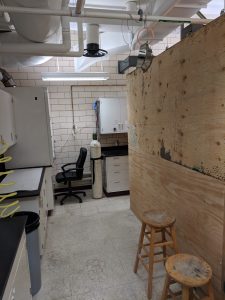 The M-EELS experiment is down for six weeks as the ESCO project to rebuild the HVAC system for the entire MRL building moves to our floor. The whole instrument is now encased in a giant plywood box to protect it from dust and mishaps. We hope to be recommissioning the instrument in the middle of March. No new science will happen until early May.

We just published a paper finally demonstrating that TiSe2 contains a Bose condensate of excitons. The 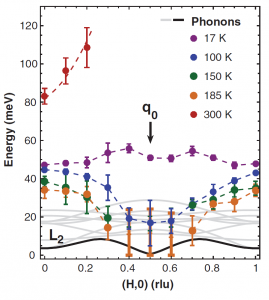 experimental signature is a soft plasmon that falls to zero frequency at Tc. Bert Halperin and Maurice Rice nicknamed this phase “excitonium” in their  1968 Rev. Mod. Phys. paper to emphasize the physical picture of an exciton condensate as an electronic crystal. This discovery, which we believe should be viewed as a landmark in our field, was done using our new M-EELS technique (see Sean’s paper, below).

The media frenzy over this discovery has been unreal, surpassing our wildest expectations. Some of the better written articles may be found in Newsweek, The Independent, and the The Daily Mail. Here is a polished video on YouTube.

Here’s a link to the article in Science. 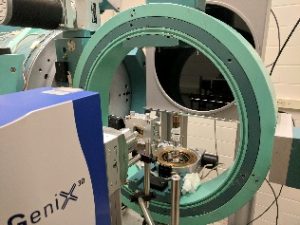 Our low-temperature crystallography instrument has a new home. It now lives in a dedicated space in 117 MRL, where it will be used by many research groups for decades to come. Stella Sun and Sangjun Lee did a great job moving the equipment, and thanks go to Youli Li for helping with the alignment and calibration. 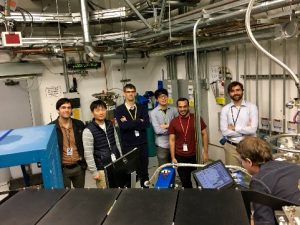 We just finished our first Free Electron Laser experiment, using the SXR endstation during Run 15 of the Linac Coherent Light Source. The goal was to study the collective modes of the stripe phase in La2-xBaxCuO4.