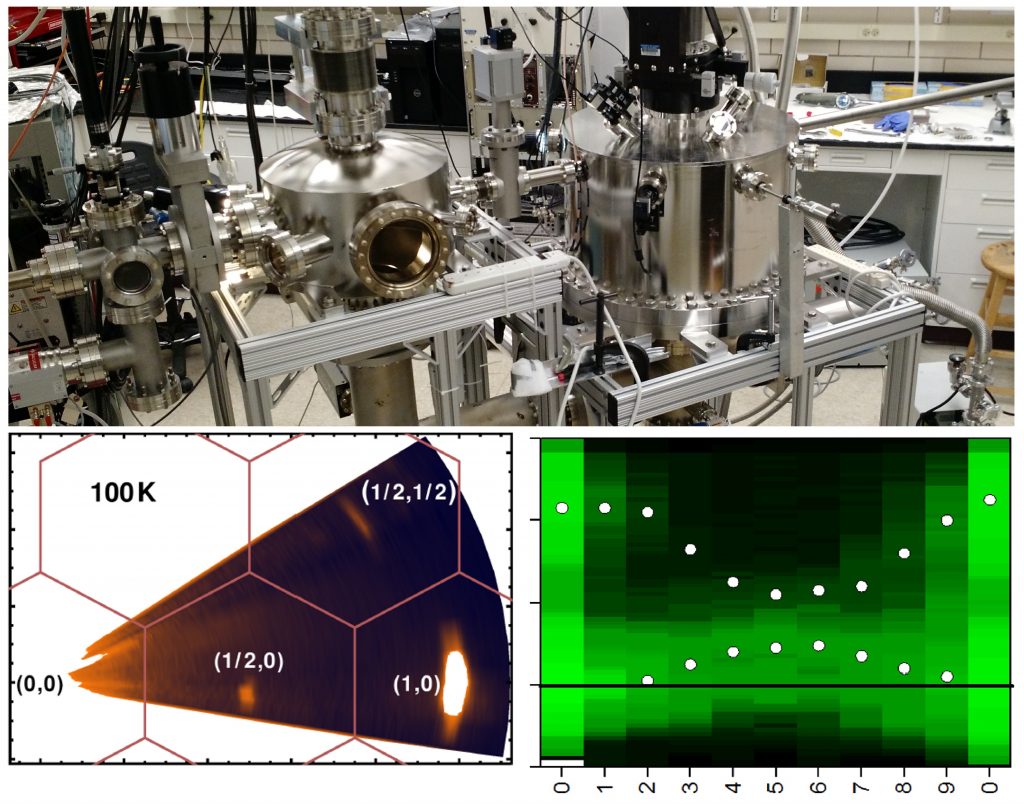 (top) M-EELS instrument in our laboratory on the 1st floor of the Seitz Materials Research Laboratory. (bottom, left) Elastic momentum maps of the exciton condensate material, 1T-TiSe2, showing appearance of superlattice reflections at low temperature. (bottom, right) Softening of the plasmon in 1T-TiSe2, demonstrating the condensation of electron-hole pairs.

One of the most fundamental properties of a material is its dynamic charge susceptibility, χ(q,ω), which describes the response of a many-body system to external fields. χ exhibits poles wherever collective modes are present, so is the most direct measure of the existence of bosonic quasiparticles in a material. χ also describes the screening properties of a material and, in the limit q → 0 and ω → 0, quantifies its electronic compressibility. Unfortunately, there has never been momentum-resolved way to measure chi, at least at the meV energy scale relevant to modern quantum materials.

In our laboratory, we have developed a fully momentum-resolved electron energy-loss (M-EELS) spectrometer that is, for the first time, capable of measuring χ(q,ω) with 2 meV energy resolution and quantitative momentum accuracy of 0.01 Å-1. As of Nov. 2017, this instrument is unique in the world. Our biggest discoveries, so far, have been the presence of a Bose condensate of excitons in TiSe2 and the existence of a scale-invariant spectrum of charge fluctuations in the so-called “strange metal”, Bi2Sr2CaCu2O8+x. We are using this technique to study collective charge dynamics in a variety of materials exhibiting exotic broken symmetries or topological order. 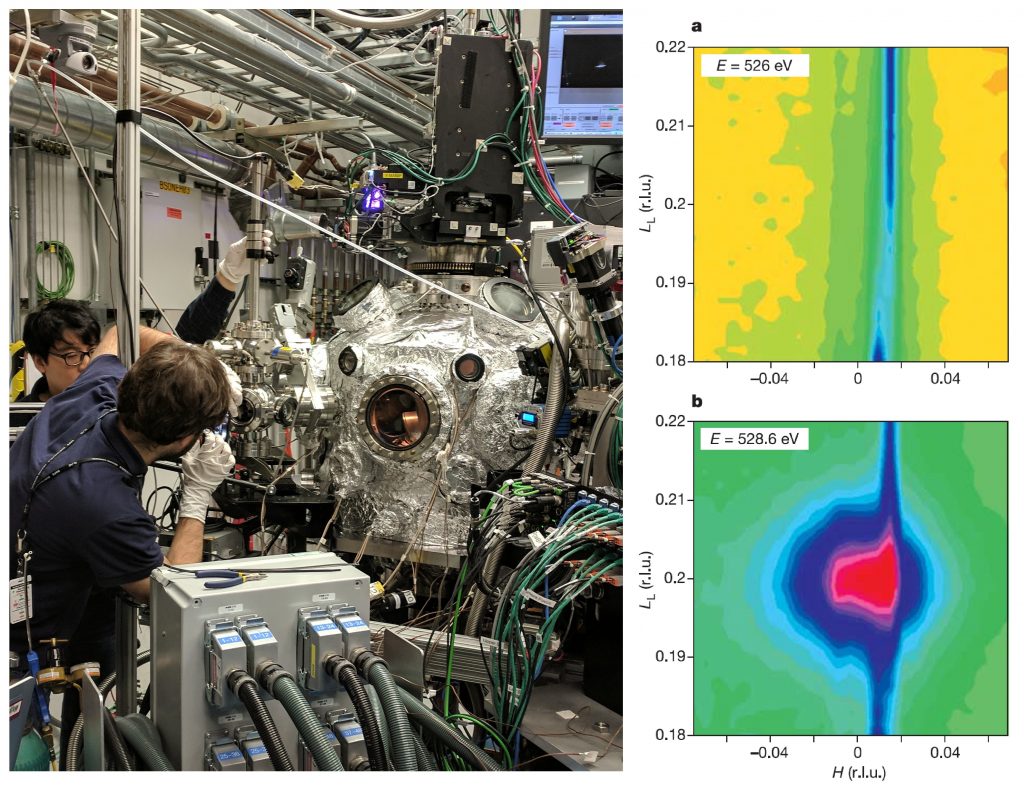 (left) RSXS endstation at the SXR facility at the Linac Coherent Light Source (LCLS). (right) Appearance on resonant of an electronic superlattice reflection in the spin-ladder material, Sr14Cu24O41, demonstrating the existence of a Wigner crystal.

The valence in many strongly interacting systems are known to self-organize into exotic states, such as charge or spin density waves, nematic order, Wigner crystals, etc. The most direct way to detect valence band order is resonant soft x-ray scattering (RSXS), in which detects such order directly through the valence density of states modulations they create. Using RSXS, our group was the first to establish the existence of valence band charge order in high temperature superconductors, discovered a Wigner crystal in spin ladder materials , and have also applied it to study interface effects in oxide devices.

We currently operate a facility for RSXS at beamline 13-3 at the Stanford Synchrotron Radiation Laboratory (SSRL), in collaboration with scientists there. We also use instruments at other national facilities such as the IEX facility in Sector 29 at the Advanced Photon Source, the qRIXS spectrometer at the BL 8.0.1.3 at the Advanced Light Source. We have also recently used time-resolved RSXS to study valence dynamics using the SXR facility at the Linac Coherent Light Source (LCLS) at SLAC National Accelerator Lab, the first x-ray free electron laser facility in the world, which allows us to study dynamics of such order with unprecedented energy resolution. 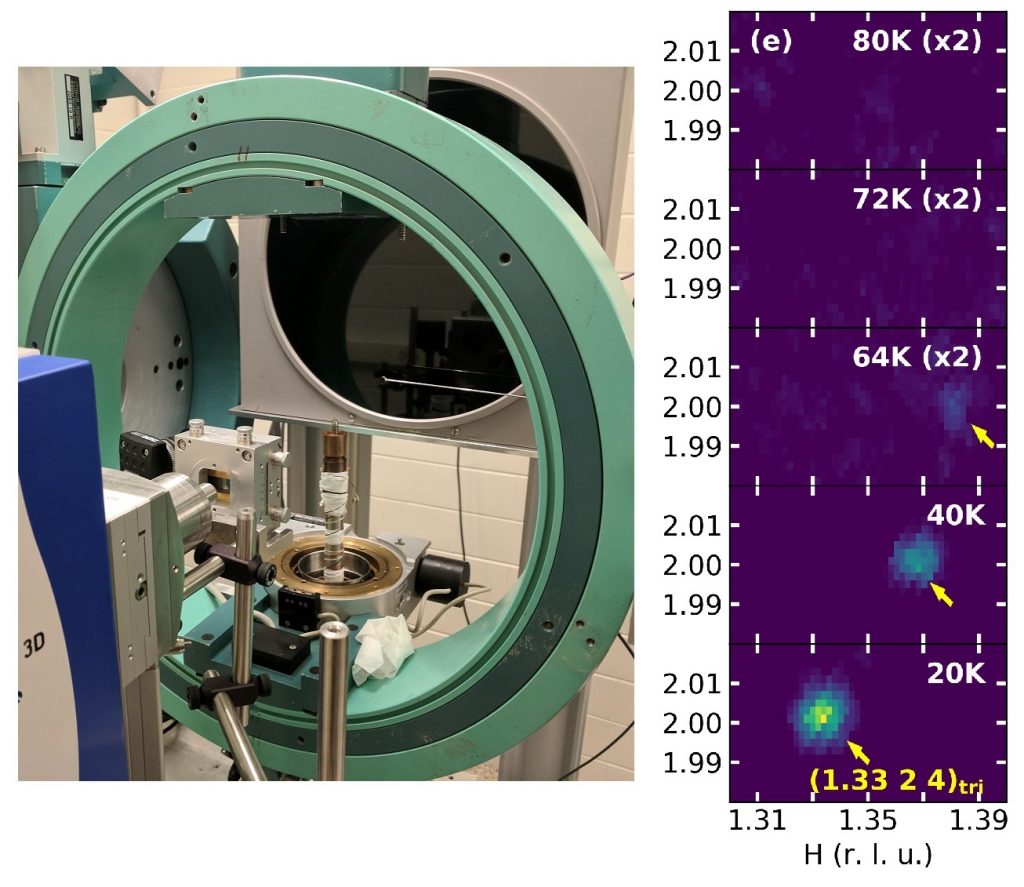 (left) Sample region in our low-temperature crystallography instrument. (right) Shifting of a Bragg peak with temperature near a lockin transition in a material containing a Peierls charge density wave.

X-ray crystallography is a technique in which high-energy x-rays are scattered from a crystal and the resulting diffraction pattern used to determine the locations of the atoms in the unit cell to picometer precision. In our laboratory, we have developed an x-ray crystallography instrument in which the sample may be cooled to just a few degrees Kelvin using liquid helium cryogens. This instrument allows us to study quantum phase transitions, which occur at low temperature in materials as a function of composition or applied pressure. We often complement our experiments with measurements at national x-ray facilities, such as C-Line at CHESS. Our biggest discovery using this technique as been the existence of a pressure-induced incommensurate phase near the superconducting dome in 1T-TiSe2, suggesting that superconductivity in this system may be associated with the formation of domain walls in the excitonic phase. We are currently applying this technique to other materials exhibiting quantum phase transitions, such as Co-doped BaNi2As2 and the heavy Fermion superconductor, URu2Si2.

A diffraction grating is a metallic surface nanopatterned into a period structure. Light diffracted from a grating will disperse into its constituent wavelengths, making gratings the most important element in optical spectrometers and monochromators. In collaboration with Inprentus, a mid-stage startup company in Champaign, IL, we are investigating the fundamental limits on the resolving power of gratings used in the extreme ultraviolet and soft x-ray range. In particular, we recently demonstrated a technique for using Fizeau interferometry to measure the resolving power of grating patterns. Gratings of this type are used at synchrotron and free-electron laser facilities, x-ray telescopes, and in line narrowing modules in exposure tools for DUV chip lithography.